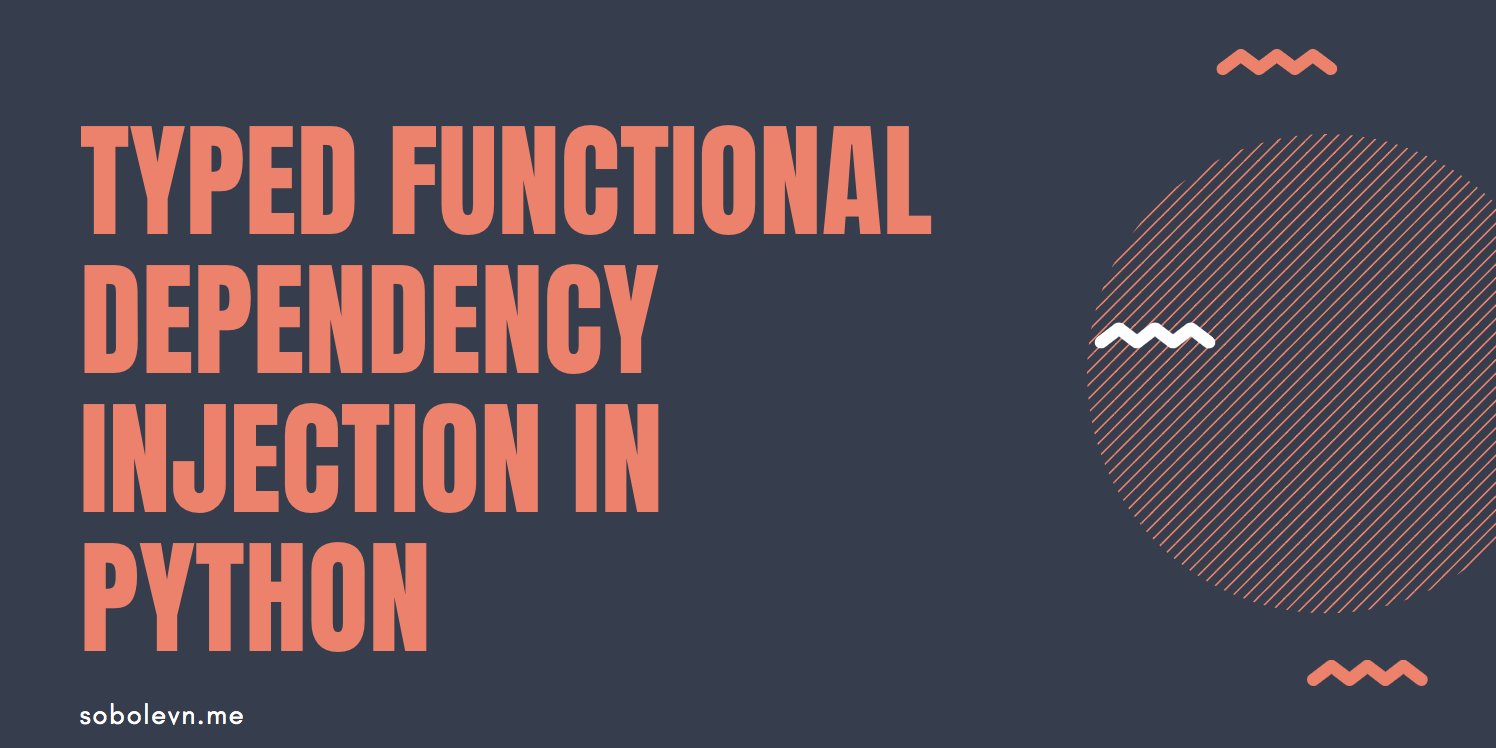 Dependency injection is a controversial topic. There are known problems, hacks, and even whole methodologies on how to work with DI frameworks.

A lot of people asked me: how can you use a lot of typed functional concepts together with traditional object-oriented dependency injection?

And this question makes a lot of sense. Because functional programming is all about composition. And dependency injection is just magic. You get some almost random objects injected into some places of your code. Moreover, the whole container to be injected later is magically assembled from the separate parts at runtime.

This leads to a serious contradiction between functional declarative style and “OMG, where did this class come from?” 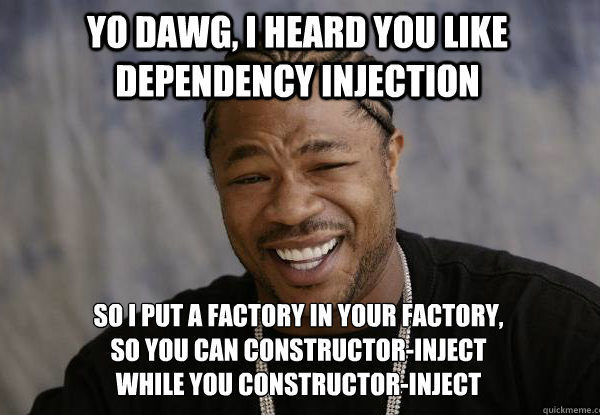 Today we are going to solve this problem with a good-old functional way.

Imagine that you have a django based game, where you award users with points for each guessed letter in a word (unguessed letters are marked as '.'):

And here’s your business logic:

This is a pretty simple app: users try to guess some word and in the meantime, we award points for each guessed letter. But, we have a threshold. We only award 6 or more points for 6 or more guessed letters. That’s it. We have our framework layer in place and our beautiful pure logic. This code is really simple to read and modify.

Or is it? Let’s try to modify it to find out. Let’s say we want to make our game more challenging by making the points threshold configurable. How can we do that?

And now your code won’t type-check. Because that’s how our caller looks like:

To fix this calculate_points function (and all other upper caller functions) will have to accept threshold: int as a parameter and pass it to _award_points_for_letters, like so:

It also affects our views.py:

As we can see it is doable. But, it requires to change the whole call stack for a single parameter. Which leads us to some evident problems:

All in all: this is working, but not a scalable solution. But, I would probably do this myself for a small app.

A lot of Django people right now might ask: why not just importing settings and using it like django docs teaches us?

Because this is ugly!

For now, we have framework-independent business logic. It is a great thing. It is resistant to any framework-specific changes. And it also does not implicitly bring all the framework complexity with it. Let’s remember how django.conf.settings works:

Is it worth it? Maybe. Sometimes django.settings is good enough. You can possibly have just a couple of primitive values to be injected. And this way allows to do it very fast.

But, I would not recommend anyone to go this way if you really want to build a large app with clearly defined boundaries and comprehensive domain logic. I would even recommend using import-linter to forbid to import anything from django in your logic.

So, how in a world I am going to pass this troublesome value into the function if nothing really works? Parameters are too noisy, containers are too magic and hard to work with, and global settings are just pure evil in the form of a singleton?

Functional programmers are smart people. Really. They can do literally everything with just pure functions.

They have also solved the dependencies problem with elegance while maintaining simplicity. The core idea of dependency injection in a functional way is that we don’t call things that rely on the context we don’t have. Instead, we schedule them to be called later. Let’s see how our original logic will change after adapting this idea:

Please, notice how we are now passing factory function to the top level of our app. Also, pay extra attention to our new _Deps protocol: it allows us to use structural subtyping to define the required API. In other words, all objects with WORD_THRESHOLD int attribute would pass the check (to enforce the django settings typecheck use django-stubs).

The only thing left is to call our returned factory function from the very top:

Looks easy! All our requirements are satisfied:

The only problem we now have is that our logic does not compose well. Let me illustrate my point with a new requirement. During the holiday season our game might award one extra point to the final score randomly. And here’s how we can adapt our source code to meet the new requirement:

But, oops, awarded_points has type Callable[[_Deps], int] it cannot be easily composed with this new function. Of course we can create a new function inside _maybe_add_extra_holiday_point just for the sake of composition:

But is it pleasant to work with? I hope most people will agree with me that it is not.

Let’s remember that functional programmers are smart people. They can do literally everything with just pure functions. And composition helpers. That’s why they came up with the Reader monad (or as we call it RequiresContext container to not scare people to death in Python land): it is a composition helper for this exact situation. Let’s refactor our code once again to see how it works:

How does it work?

That’s it. No mess, no magic, no framework internals. But typing, composition, and simplicity.

What if you want to also change the symbol that indicates unguessed letter (currently .), to be configurable? Some users prefer ., some _. Ok, we can do that, cannot we?

A little confusion can happen to functional newcomers at this step. Because we only have deps available inside _award_points_for_letters and not inside calculate_points. And composition again is the answer. We have a special composition helper for this case: Context.ask() which fetches the dependencies from the current context and allows us to explicitly use it whenever we want:

Now we can share the same immutable read-only context for all our code.

Static typing is much more than accidentally trying to add a string to an integer. It is about your architecture and rules that each piece of this complex system has.

And many readers might already found one trap that I have left in this example. Let’s reveal the ugly truth: _maybe_add_extra_holiday_point is not pure. We won’t be able to test it without a mock on random. And because it is impure, its type is Callable[[int], IO[int]].

Wait, what is it? IO is your best friend when we talk about good architecture and high-quality composition rules. It is an explicit marker that your function is not pure. Without this type, we are free to write an ugly, untestable code where we want it. We don’t have any contracts to respect. We can just pray for the reigning chaos.

And also, don’t forget that some functions may end up with successful execution and may also fail. Throwing exceptions inside your business logic is ugly. And it also removes the explicit contract from your architecture. That’s a barbarian practice. If something can go wrong, we have to be prepared for it. That’s why many people use Result to indicate that things can (and will!) go wrong.

All these two types are heavily related to our RequiresContext container. Because its return type can be tricky:

It does not look fun to compose, yeah? That’s why we also ship useful combinators with returns like:

This way returns library takes all the hacky composition rules on itself and provides nice API for our end users.

“So, are you saying that I should not use any DI frameworks at all?” one may ask after reading this article. And it is an interesting question indeed.

I have spent a lot of time thinking about this very topic myself. And my answer is: you can (and probably should) use a dependency injection container framework on the framework level.

And here’s why: in real-world apps your _Deps class with soon become really big. It would have lots of stuff inside:

To handle all this stuff you would need to import a lot of other stuff. And you will need to create this monstrous object somehow. That’s where DI frameworks can help you. A lot.

With their magic creating this context might be a lot easier and safer. You need complex tools to fight real complexity.

That’s why tools like dependencies are required for every complex system: both functional and imperative.

Let’s sum up things we have learned today:

Functional programming is fun and easy! Feel free to star our repo if you liked the concepts above. Or go to the docs to learn more new things.

Very special thanks to Nikolay Fominykh and Artem for reviewing this article.