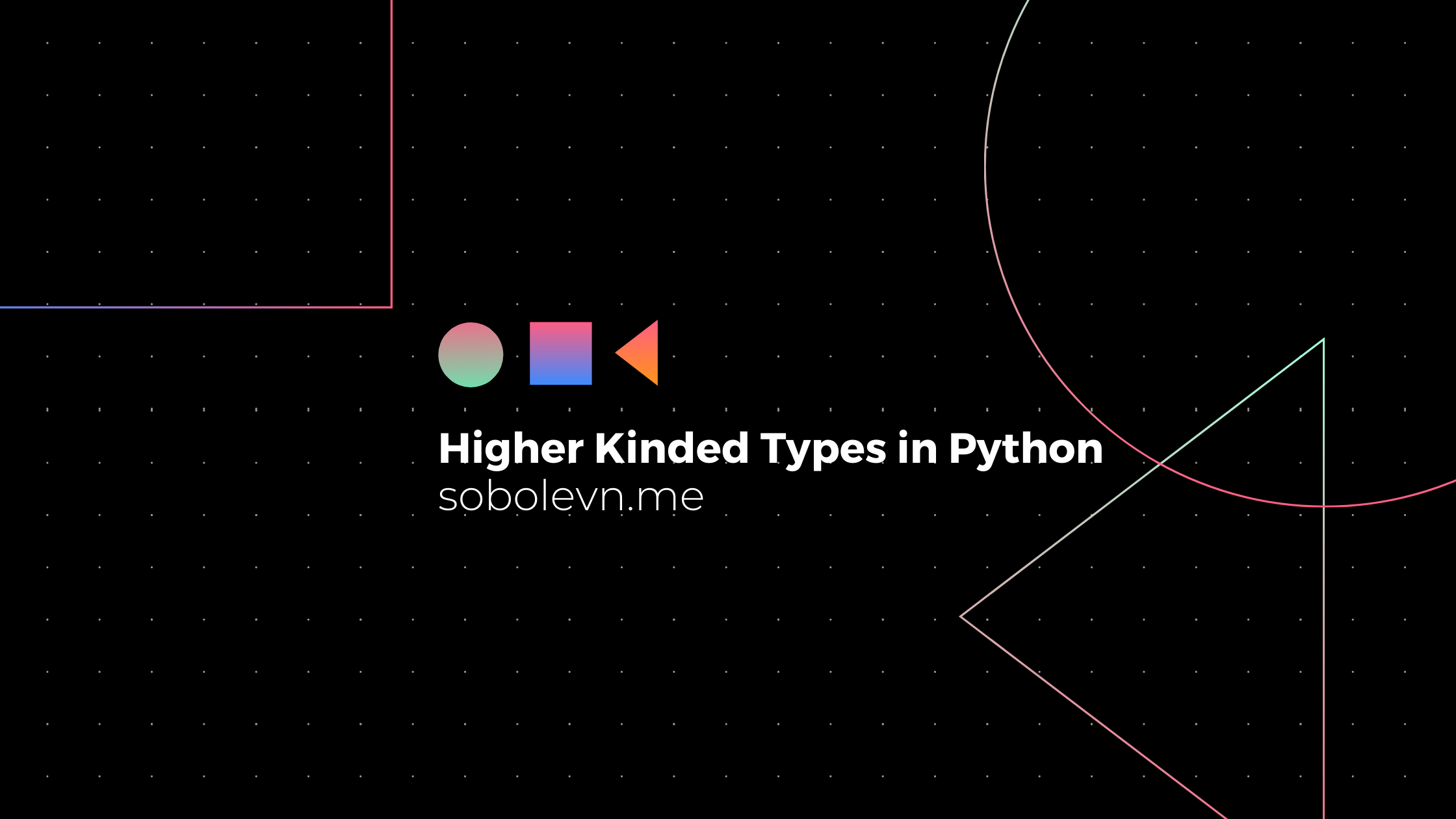 dry-python/returns@0.15 is released! And it means that now anyone can use our Higher Kinded Types emulation in their projects.

Typing is layered. Like a good cake. There are at least three layers that we are going to cover.

Simple (or flat) typing, like x: int = 1. This allows us to express simple types and their transformations. Like int -> str:

A lot of languages like go and php do not go beyond this line. And they still work pretty well! These types are also sometimes called *-kinded. It can be understood as “a place for just a single type argument”.

Generic level is required to express “nested” types. For example, you have a list of integers. In Python we annotate it as List[int] or list[int] in Python 3.9. This allows us to have types with other types as arguments. List can receive int or str or even another List as the type argument. This way we can nest type and types start to have their own structure.

Generics are much more interesting than simple types. And they can have multiple type arguments:

This would be very helpful for us in the future, I promise.

We can also write transformations for generic types:

But, that is where things begin to be quite complicated.

How can this function work with other iterables like set, frozenset, tuple? We can express this in Python as easy as:

But the typing part would be quite challenging. Let’s try several things.

The first obvious thing to try is Iterable protocol. It is builtin into Python and does what we need.

Let’s try it out:

You can see that a part of our typing information is lost. We pass List or Set or Tuple and always get the Iterable back.

Sometimes - this is ok. But, in some cases, this is not enough. Let’s try some other technique!

One can say: we are all using Object-Oriented Programming! Why cannot we just create a new method for each type we need? And specify the exact return type there!

Well, it is a possible solution. But, there are some reasonable problems:

Let’s try something else.

Another solution that might solve our problem is using the @overload decorator with proper types for each required case.

Awesome! Looks like we’ve achieved our goal, haven’t we? But, there’s a new problem. We have to manually list all possible cases in a function’s signature. This works for cases when all possible arguments and outcomes are known in advance. But, not in this case. In Python Iterable is a protocol. We can use this function with any type with __iter__ method defined: with both builtin and custom types. So, the number of possible arguments and outcomes is endless.

To illusrate the problem, let’s see what happens for Tuple which is not listed in the function’s overloads:

We, in dry-python used this technique with @overload decorator for our previous versions. This allowed us to write correct definitions of functions working with generic types. But, they were limited to the pre-defined set of our own types. And we wanted to allow our users to create their custom types based on our interfaces. With the full existing code reuse.

That’s where the idea of Higher Kinded Types becomes useful. We need HKTs when we want to change the inner structure of generics with full type information preserving and openness to the extension. In theory, you can write something like:

And this would solve our problem! What happens here is that we abstract away the Iterable type itself. And then ask mypy to figure this out for us.

This way we can potentially have stringify_iterable_items working for any Iterable type, but with the exact same type returned back without any information lost. And it would work for all types.

Unfortunately, it is not supported at the moment.

Turns out we are not alone in this situation. There are multiple languages where Higher Kinded Types are not natively supported yet. But, they can be emulated:

And now with Python too!

There’s also an original whitepaper for ones who are interested.

The core idea of HKT emulation is that we can write types the other way around: not like T[int], but rather like Kind[T, int] (which is absolutely the same thing).

This way we can transform the inner structure of generics, but maintain the simple context without reinventing TypeVar with type arguments. And our function’s type signature will look like: Kind[T, int] -> Kind[T, str].

TLDR: here’s the final working code with all the logic, all the hacks, and everything. In this article, we going to write and explain it step by step.

We would need a better example to test our implementation. Let’s build two types: a Box and a Bag. Box is defined by its size, while a Bag is an item of fashion: it has a brand name and a model name (I have a wife, I know this stuff!).

And we can create Boxes and Bags of different types, because we can put different things inside them:

Now, we need a function with a type transformation. Let’s say we want to apply a function to the value inside boxes and bags. Let’s use fake BoxOrBag type for now to illustrate our intent:

We only need to change current fake BoxOrBag type to a real HKT. We would need to define a new Kind type to make the emulation:

One pro-tip about Kind: it won’t not exist during runtime. Only during type-checking.

And last, but not least: we need an implementation for apply_function!

If we try to run this code, we would see something like:

This happens because _InstanceKind does not know anything about an interface we are working with right now. We need to bind it to something. And we also need an interface to work with:

Take an extra look at the abstract with_value definition: it is also Higher Kinded Typed. Because the interface knows that we are dealing with the internal structure change of a generic type. We would also need to subclass HasValue and implement the with_value method for both Bag and Box types. The good thing about subclassing HasValue is that HKTs as well as regular types will protect us from defining incompatible methods and properties.

Let’s review what we have done so far:

That’s pretty much it! I can proudly call this “unhacked” version. In an ideal world, our HKT emulation would just work. But, in our real-life world - we still need some hacks to make this possible.

First of all, let’s try to type-check our code to see what will happen:

Let’s think about it for a moment. Why "Kind[_InstanceKind, _ValueType]" does not have attribute "value"?

This happens because we wrote exactly that in apply_function:

We need to build something that understands our intention: when we use dot access on Kind - in reality, we want to dot access its _InstanceKind type.

Since it can take quite a lot of time, I am going to skip re-implementing this part and give links to the original source code here:

In the result we would have a working type inference:

There are two more things to solve.

First, since Kind is a type and mypy uses nominal inheritance to check subtyping (I have tried to make Kind a Protocol several times, but it does not work this way for now) it won’t be happy that we declare Kind as a return type, but return Bag or Box instead. Since these two types are unrelated in mypy’s opinion - we would need to fix that with a direct inheritance from Kind.

Now Box and Bag are both nominal subtypes of Kind and mypy will be happy with that.

Also, notice this notation Kind['Box', _ValueType]: what it means is that we inherit from Kind and pass not-yet-defined Box type inside as type argument. Sometimes it is also called the URI parameter.

Second, since Kind defines __getattr__ we would end up with catching all dot access behaviour during type-checking. For example, box.missing_attr won’t raise a type error anymore. But, would still fail during execution. We need to fix that! We can create a intermediate layer called SupportsKind with removed __getattr__ method:

Yes, this is a bit ugly, but we have to only define it once and then just use it:

Now, we have box.missing_attr fixed!

Almost what we need!

We can use a @kinded decorator for that together with one more custom mypy plugin. The idea of this hack is that we catch all calls of functions decorated with @kinded and transform their return type from Kind[I, T] into I[T].

The final iteration of apply_function will look like this:

And would work as we want:

Let’s discuss the future of this hacks. Because, we don’t want them to stay!

The main limitation, for now, is that Kind uses nominal inheritance and is a custom type. So, for now, it is impossible to work with 1st or 3rd party generics like List, Set, etc. We can only work with types who directly inherit from Kind for now.

The second limitation comes from the fact we can have generics with a different number of type arguments, as I have shown you before:

So, we would need several Kind alises to work with different amount of type arguments. It would also have a reasonable limit of three type arguments:

A lot of readers might be shocked by the number of hacks we have to apply to make this work. I guess it is time for me to explain what hacks are temporary and which are going to stay with us.

The good news, all hacks can be solved in the future.

Most of the hacks come from the fact that mypy does not know what Kind is. Possibly, in the future, it can be built into mypy. And @kinded, __getattr__, and SupportsKind hacks would go away. Together with the fact that Kind needs to be a direct supertype of types we want to represent as HKTs.

Variadic generics are also in-the-work right now. You can have a look at the PEP draft. So, in the future KindN, Kind1, and Kind2 would hopefully go away.

I am going to finish this article with an example I have promised you in my previous article (it took almost half a year of hard work to fulfill!).

Last time we talked about making a fully typed function that can work with sync and async HTTP clients with the same API.

And here it is:

When used with sync IO type, it would work as a regular function. But, it can also work with async Future type.

The possibilities with Higher Kinded Types are endless! It shines with:

Wow, it was a cool ride! I hope you have enjoyed it as much as I did! Working on Higher Kinded Types was super fun and I am excited for you to try it.

P.S. Does your company want corporate training on using types in Python with mypy? We, in DryLabs can help! Drop us a line.

To Pablo Aguilar for working on this release and reviewing this post!